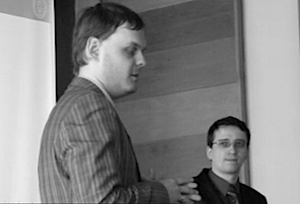 I had the pleasure to work with Tomek for approximately 7 years. These were the years of my introduction into science and I am very grateful that I could meet such an extraordinary personality in my “early” scientific life.
We started at some point in 2002/2003 in a functional computation practice class. I knew that He was a brilliant character, it followed from the fact that a researcher mainly focusing on probability theory (as I thought at that time) was teaching us the details of fairly esoteric functional languages like Huskell or Scheme. I was also aware of his countless successes and of a particular eccentric style.
Shortly after we started working together on my masters project (finished in 2005) and then continued on a phd thesis (finished in 2009). His interests were very broad: physics, mathematics, statistical mechanics, computer science, all of those things he knew to the level of detail that allowed him to really fluently move around and combine ideas from many fields – a truly holistic approach – something that contemporary science needs like oxygen. He was never limited to some small sandbox, rather he would just set off to conquer new fields and directions like a fearless explorer.
At the same time he was always very serious about teaching. Always prepared with notes, but often the most interesting parts of His lectures would be when He would diverge and improvise. That was when one could really appreciate his knowledge and amazing skill. Unfortunately, in particular early on, we (his master students) were far too dumb for him to show his virtues. I still remember though, many occasions of being mesmerized.
He was also a very emphatic and concerned with small stuff. I remember him talking about some ridiculous discussions in the meetings of the home owner association in which he always participated. In a sense he was outside of these things, but on the other hand He never escaped from being involved – even in those little irrelevant things. Never discouraged by some outside stupidity, always pushing forward in a positive way. Always having lots of faith in people, but not the naive kind of faith, rather that kind which actually makes people do the right things.
I remember the day I was getting married Tomek gave me a call about some grant application we were putting together at that time. After a few minutes of conversation I said “look Tomek, I will call you back because right now I’m getting married”. After 10s silence Tomek started apologizing and congratulating. It was one of those occasions when he was so surprised He became a little chaotic. Later He confessed multiple times how embarrassed he was about that call.
In late 2009 we (myself and my wife Agata) already knew that we would be moving to San Diego, we were inviting friends to say goodbye. We had Tomek and Agnieszka for a dinner one day in December. Tomek was showing off his new driving license (after numerous failed attempts he finally passed the test). His comment was that “they should totally make this exam much harder now (laugh)”. That was just his style, no anger, no memorizing of any disappointments, He always looked into his future light cone.
We went to San Diego in early 2010, this was my highly anticipated dream job. I felt like I wanted to work with Tomek on the side (back then we were finishing a paper together with Jarek Piersa). Now after 3 years I feel I would need him even more that I expected back then. Only now I begin to appreciate many of his ideas (and I believe many of these ideas are yet to be appreciated), as I learned new things and read recent papers in the fields related to critical dynamics I imagine him crushing through these results like a rocket and building completely novel theories in a snap of a finger.
He never mentioned a word about his health. We exchanged last emails in November 2010, his replies were always full of smiles. These emails were difficult for me to read, as I knew that things were not going in a good direction. I wrote saying we just learned that we would have a baby. I know he read this email, and was happy about the news, but never replied. Seven months later little Alicja was born. One life goes away, another appears. Tomek would certainly focus on the positive side of things. Alicja will only know him from the reflection carried in the eyes of those who had the luck to meet him.

Let’s make sure this reflection is bright, vivid and warm, just like Tomek was.

Back to main page